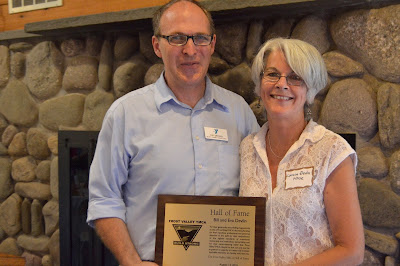 Here are the program notes:

On this day we honor two people whose perfect combination of complete calm and strenuous effort astonished absolutely everyone who worked with them. They were—at one and the same time—easy-going and hard working. Bill and Eva Devlin could do anything they put their hands to. “When you needed to know how to do something,” remembers their daughter Lorraine, “you asked them.” They could figure out anything, correct or disentangle anything. And that’s a good thing because anything is precisely what was needed to be done when they arrived at Frost Valley, given its precarious state at the time.

In 1967 Bill Devlin, then working with the Girls Scouts in Pennsylvania, put an ad in the American Camping Association magazine announcing his availability for work at a camp, and got a response from Halbe Brown at Frost Valley. Halbe had arrived in 1966 and immediately sensed he had a clean-up job on his hands. There was Camp Wawayanda for Boys and Girls, Family Camp at the end of the summer, and guests during a few non-summer weekends. As Halbe wildly dreamed of a rapid, radical expansion of programs to serve families and children, he hired Bill Devlin as his first full-time staff member. The Browns themselves didn’t even yet live all year at Frost Valley. From September to June on most days of the week, it would be just the Devlins. Bill and Eva and their four children first drove down seven dusty miles of unpaved road from Claryville and wondered what they had gotten themselves into. Then they saw the large but rather dilapidated grey house through which Halbe guided them, and Bill thought to himself: “No way.”

Yes, way. They stayed. They transformed that old house into a home—into, in effect, a model for how other families (the dozens and dozens who have come to join the year-round staff in the subsequent decades) could constantly manage to merge living and working at Frost Valley: they not only maintained for themselves but conveyed to others a strongly positive sense of family overall—of familial generosity; of home-style care for every building around camp and for every program; of a brotherly and sisterly hospitality shared with thousands of weekend guests, teachers and their students, summer camp staff, many of whom came to know them well and to revere them. Bill and Eva Devlin made Frost Valley their home, yes, but they also created for Frost Valley a sense of home.

Luckily, given the exigencies, Bill and Eva felt a keen desire to fix whatever was broken and, what’s more—could do it! For years Eva almost single-handedly worked to improve the image of Frost Valley by voluntarily restoring the Castle (inside and out), re-painting the old totem pole at the camp entrance, planting gardens, scraping and painting Biscuit Lodge, etc. A generation of camp staff knew always where Eva was as they passed by her famous rig—a two-wheeled cart pulled by a little tractor—which carried her supplies and served as her mobile office.

Bill did more than his share of fixing broken machines; figuring out an arcane key system for the camp; keeping track of handwritten registrations of family groups, church groups, youth groups, athletic teams, and family campers; and managing meals at the dining hall in his hyperarticulate and charming manner. He was the best and most patient explainer anyone who met him ever knew. Very quickly those who worked for him recognized and cherished his legendary readiness to orient and guide, his extreme fairness, his open sense of ethics and flawless honesty. The high-school-aged people who helped out by doing dishes and running activities on weekends (most of them spillovers from summer camp staff) soon knew they had in Bill an employer always willing to stop and teach. For several of these wayward young people he became a second father. These men and women, now in their late 50s and 60s—quite an accomplished group in their own right—recall Bill as the first and fairest boss they ever had. “We knew exactly what Bill expected of us,” one of these former staff remembers. “And when we ‘screwed up,’ to use his phrase, as we often did, he mentored us and gave us another chance.” “Just for the apprenticeship alone,” another now says, “we would have worked for him for free.”

Bill Devlin was the person who founded and developed Frost Valley’s Environmental Education Program, a historic achievement. Then he single-handedly coordinated and led every visit by a school (typically Monday-through-Friday visits) greeting and orienting the groups, presenting announcements in the dining hall, teaching field math and stream ecology and astronomy; soon he was idolized by the teachers and principals. Nearly a half century later, Frost Valley’s “EE” program is of course world renowned. It has expanded greatly but its mission and mode of teaching are precisely those that Bill invented back in 1969. On the basis of that impact alone, all those who love Frost Valley’s commitment to the once-iconoclastic idea of teaching children outdoors, taking them to a place beyond the classroom, on the ground and “in the field,” owe Bill a great debt. It wasn’t easy making environmentalism culturally befit what had been only a summer camp, but once it happened it became the most natural thing.

When in 1975 Frost Valley’s rapidly expanding conference, EE, and summer camp programs together exceeded 30,000 annual participants for the first time, Bill could be counted on to describe unintended consequences of the new giant scale of operation, and to express concerns about further expansion without apt levels of staffing, improved facilities, and restatement of the mission. As Bill and Eva moved on to a new opportunity that year—to Camp Jewell YMCA in Connecticut, where Bill served as Executive Director until his retirement—they left very dear friends and anticipated talented future colleagues, all of whom, whether knowingly or not, have taken the Devlins’ familial ethic to heart: every person who comes to Frost Valley to learn about the natural world, or to find themselves, or to challenge their settled values, should be treated by us as an individual using our site in search of some congenial aspect of our mission. That Frost Valley has managed to serve as many families and children as it has over the years, and maintained the commitment to personalizing each and every relationship, is owing to the marvelous decency of these two people, Bill and Eva Devlin, whom the Frost Valley YMCA Board of Trustees gratefully and unanimously votes to induct into our Hall of Fame.

It seemed time to gather together photos and recordings. I'd always hesitated because I didn't want to imply that my own take was definitive. The blog--the medium of the blog--seems the right combination of diary-like subjectivity (blog readers simply know this is the blogger talking) and a communal forum for various perspectives and multiple stories. 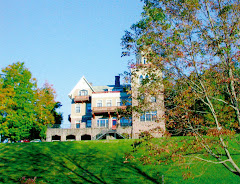 get email updates from this blog

If a new entry is added on any day, you will receive a brief email notice of it.

new at my blog 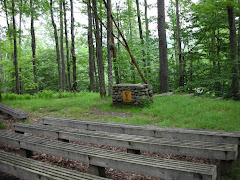 When I die let my ashes
flow down Biscuit River,
let 'em roll on in water
the color of sky.
I'll be halfway to heaven
at a New Wawayanda,
saying "Wawayanda spirit
it never did die." 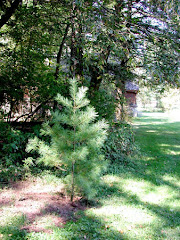 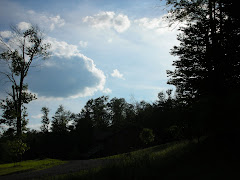 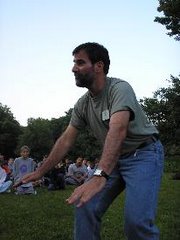 is a place where good things happen when people pay attention to each other. There’s endless beauty here - the high meadows, blankets of evergreens, and pristine brook trails – and you can meet nature in all its forms. But more than that, it’s a place where our ties to friends and family are strengthened. When a community of people came to the Catskills to build Frost Valley, they had in mind a place where you can sit next to someone you think you know, and then really get to know them. It also happens to be where the everyday light and shadow is enough to inspire artists; where American fly-fishing was born; and where today, a quarter million acres of green forests still remain “forever wild.” At Frost Valley, where we are does have an effect on how we treat each other. Here, a family can relearn what “family style” means as they share a meal together. The rose-gray river stones in the hearths and chimneys around camp reflect the colors of nearby Biscuit Creek and pull you into the surroundings. If you need more reasons why it’s so special here, we encourage you to explore citizen science activities during every season. But you don’t have to, because you might have more fun just learning silly camp songs. And by the end of your stay, when you your family and newly found friends are composting like pros together, everyone becomes richer, including next year’s butterfly garden.

...and if I could transport myself

not just back to this place, but to a certain moment in my personal history here, it would perhaps be:

end of lunch on any July day in 1968, and Dave King (our camp director) walks to the center of the dining hall, without microphone, and without introduction of any kind begins to lead one of the 25 or so camp songs we sang in those days. He is the maestro, waving one arm to the rhythm we are to follow and with the other arm, at turns, directing us to sing quietly or loudly or pointing toward some one camper who isn't singing or (rarely) is talking. And it's "Young Folks Old Folks" or "Zum Gali Gali" or "Deep and Wide" and I look down to the end of the table at my counselor and he's singing too, no hesitation, not too old for this, totally entranced and I myself turn my gaze back toward Dave....

Okay, I ache for that. Not being young again, not quite. More like being momentarily again part of such harmony. 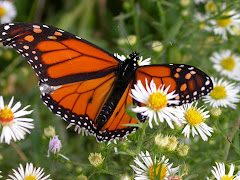 "The blog is awesome - I just went back through the whole thing again. I'll say this without shame - I ache for Frost Valley. I spend a lot of time and cerebral metabolism trying to devise a way I can get back up there for a session...." 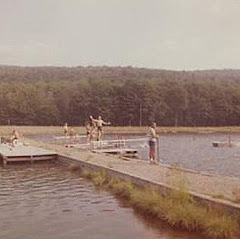 looking in the direction of Wildcat Mtn. and the boathouse (which is off to the left)

Village Chief \vil aj cheef\ n: An overworked, underpaid, camp official expected to be everything to everyone, including, but not limited to, Counselor, Mediator, Motivator, Programmer, Administrator, Police Officer, Caretaker, and Supervisor, all while maintaining good working relationships with parents, campers, counselors and support staff, and without whom any summer camp would struggle to function adequately. 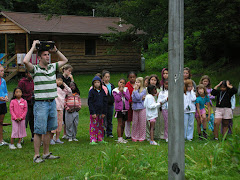 is an original Catskills denizen. She has family scattered all across the region, she knows all the old stories about one-room schoolhouses, what this Claryville house was used for in the old days, and so on. Dot was the first recipient of a recent annual staff award, and when she received this honor everyone stood and applauded, tears in their eyes. Finally a chance to recognize a true community elder - hard working, honest, a kind & beautiful soul. [LINK] 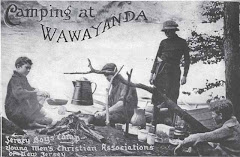